Flights of Fantasy in Gingerbread

Edible Architecture: Flights of Fantasy in Gingerbread, is the first in a series of publications created by The Humanities Exchange, that will focus on different holiday traditions around the world.

You can order a pdf of Edible Architecture for $14.95  by clicking on the buy now button at the bottom of the page

You can reach us by email at publicationorders@earthlink.net

Read the story of the magical houses, palaces, fairy tales, fantasy villages, and futuristic dwellings — all edible and temptingly aromatic.

…..An entertaining and delightful gift for your friends at Christmas.

Edible Architecture will amaze and delight in its celebration of the world of Gingerbread Houses. Take a tour of some of the astonishing gingerbread creations around the world, and discover a fascinating world of exhibitions, competitions, chefs, and creators. Adorned with frosting and tasty candies on rough German-style gingerbread, these original and colorful creations have a unique and delicious origin.

Here are summaries of the chapters of the book:

1.  The Magic of Gingerbread Houses

Each year, as the days become shorter and people look forward to the holidays, the sights, sounds, and delicious smells of the season fill the air and help to bring light to darker and longer nights. A creative and joyful custom that doesn’t seem to have a direct relationship with any other holiday celebrations, is the tradition of decorated gingerbread houses.. Covered with frosting and tasty candies on rough German-style gingerbread, these original and colorful houses, have a unique, and delicious origin………

Gingerbread and using ginger to season foods and drinks has a long history that stretches back to antiquity. Gingerbread has been around for thousands of years, since the times of the ancient Greeks and Egyptians, and honey cakes made by using ginger can be traced to ancient Rome……..

3.  Hansel and Gretel: Eating Their Way into the Witch’s House

The origins of gingerbread houses seem to be inextricably linked to the children’s tale of Hansel and Gretel………
illustrators, symbolism, historical parallels…

Hard by a great forest dwelt a poor wood-cutter with his wife and his two children. The boy was called Hansel and the girl Gretel. He had little to bite and to break, and once when great dearth fell on the land, he could no longer procure even daily bread. …….

Alice in Wonderland, from the Seattle Sheraton 2012 Display, Once Upon a Time.

Many children’s stories and rhymes are often used as subjects for gingerbread houses. For mny years, a holiday tradition at New York’s Botanical Gardens in the Bronx, has been Gingerbread Adventures…………..

6. Bergen – A Gingerbread Town in Norway

Every year since 1991, the people of Bergen, Norway, build a city of gingerbread as an end of the year tradition. A true community collaboration, this gingerbread city is the largest (in area) in the world, and every year, kindergartens, schools, businesses and thousands of individuals contribute gingerbread structures that are placed in the village. …..

Since the 1950s, it has been a tradition of the White House in Washington DC, to have a special gingerbread house for the enjoyment of the thousands of guests that are entertained and visit during the Christmas and New Year’s holidays. For the last year of President Obama’s presidency in 2016, approximately 68,000 visited the White House during the holiday season……..

A gallery of amazing buildings…….

Could there be a better pairing than architects and chefs working together to create gingerbread houses? One of the holiday traditions at the Seattle Sheraton Hotels is their Gingerbread Village – designed by local architects and created by Sheraton culinary staff…….

“Gingerbread” in architecture and design refers to a style that features elaborately detailed elements. Even though the term occasionally is used for highly detailed and decorative styles, in general it refers to the work of American designers of the 1860s and 1870s. The style was used to decorate both public and private buildings, and it also became known as stick style — where every possible external vertical or oblique surface of the buildings and arches were decorated with fanciful hand-carved wooden latticework…….

During the past few years, the Waterbar restaurant in San Francisco has showcased impressive gingerbread masterworks for the holiday season. Created by the pastry Chef Angela Salvatore, creations have included intricate replicas of Candlestick Park, followed by AT&T Park, the Palace of Fine Arts, and the masterpiece for 2016 was an astonishingly realistic:replica of the city’s Ferry Building with its Tuesday Farmer’s Market…..

Every year the Pastry Chef for The Westin St Francis Hotel San Francisco has been creating extraordinary French chateaux in gingerbread for the holiday season. The only hotel located on San Francisco’s Union Square –it opened over a century ago in 1904, and has been a witness to much of the city’s rich and colorful history, and continues to be an elegant and distinguished part of San Francisco’s heritage. The beautiful Sugar Castle, originally designed in 2005, resembles a French Chateau with grand circular towers, and colorful illuminated windows…..

Life-size gingerbread houses have been built at a number of hotels around the US during the past few year, but not all of them allow guests to step inside, let alone have a meal for six. But an Arizona hotel took it to the next level by creating one that guests can actually eat inside……

One of the most intriguing stories in the gingerbread house world is the history of Jon Lovitch’s GingerBread Lane, in New York. In 2016, GingerBread Lane won the Guiness Record Title for the largest confectionary village in the world — for the fourth consecutive year!

16. Entering a World of Gingerbread Competitions

Gingerbread house competitions have been the rage in the US and Canada for many years and it’s not difficult to understand why. Designing and building an award-winning gingerbread house combines the skills of baker, architect and visionary. For a family-designed gingerbread house, it takes many hands –both adult and child-size to construct the dream home. The largest competition is sponsored by the Grove Park Inn in Asheville, North Carolina and it has built a reputation for attracting 400 of the best gingerbread house designers from across the nation

You can see a preview of the book by clicking on the image below.   The shopping cart is also available on that preview.

Multiple copies are available for a substantial discount  Inquire at publications@humanities-exchange.org. 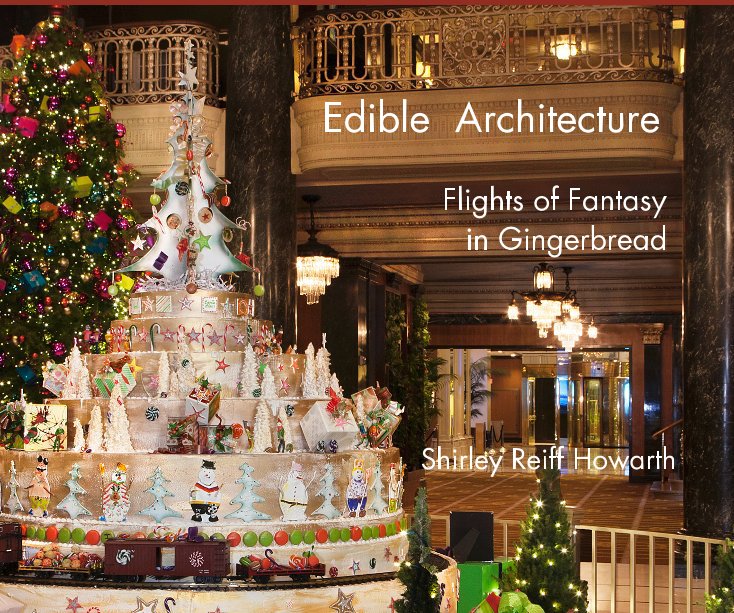 Edible Architecture is available on Amazon in a Kindle edition

If you want to buy a PDF of Edible Architecture for $4.95, please click on the button below

You can reach us by email at publicationorders@earthlink.net